The concert flute, or C flute, is what we think of when someone mentions the flute, and it is certainly the most widely played instrument in the flute family. Flutists start out learning the C flute, 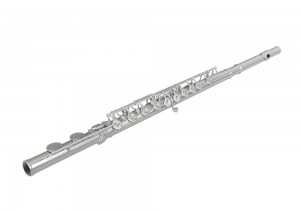 and, if interested, add to their skills later by learning to play another type of flute from the flute family. Variety in flutes is not a new thing – flutes have been around for centuries, and transverse flutes, flutes that are held horizontal across the body rather than vertically, are illustrated in art as early as the Renaissance. If you’re a serious flute player – or just like to try new things and have a little fun – you may want to consider expanding your abilities to include other types of flutes in the modern flute family.

The types of flutes we find in the modern flute family especially started to develop in the 18th century, with solo players who wanted to extend the range the flute could play. Early attempts at extending range only slightly adjusted the size of the flute. In fact, this is where the separate foot joint was first introduced, allowing the flute to play as low as c1 or b1. But elongating the flute this way also caused problems. The difference in length and diameter of the cylinder reduced the fullness of the lower notes and also affected intonation and tone color. Overall, just trying to add more notes to the C flute wasn’t gaining range while keeping the sound and character of the flute. Flute makers needed to develop each size as its own instrument to perfect each of these instruments’ distinctive musical potential.

Composers first used the piccolo to extend the range of the flute. If the composer wanted a higher register than the flute allowed, the piccolo would be put on the melody with the flute playing harmony below it. The piccolo was also often used to decorate the melody using ornamentation.

Today, piccolo is used regularly in orchestral scores and opera. The piccolo can add brilliance to a march, or imitate the sound of birds, as in Johann Strauss’s Die Fledermaus. High, sharp sounds from the piccolo are used to represent sparks during a storm, and softer tones from the piccolo in unison with the flute can create a feeling of tranquility.

The piccolo often has a bad reputation because it can sound shrill. It is also more difficult to play than the other types of flutes, especially in terms of intonation and tuning. Its smaller embouchure hole requires a tighter embouchure and a faster air stream, especially in the higher register. The higher register, also, is harder to tune anyway because of the smaller variation in wave length for each note. At about half the size of a C flute, piccolos sound a whole octave higher than the flute. The modern piccolo can play as low as d2, and as high as c5.

Modern piccolos are 12 ½ inches in length, with an embouchure hole of 10 millimeters in diameter, and finger holes of 6 millimeter in diameter. Because of the piccolo’s small size, foot joints were never developed on the piccolo, so they only have a head joint and a body joint. 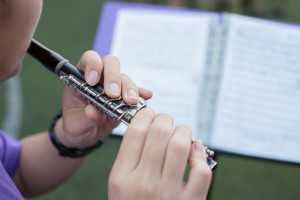 Piccolos are made from wood, silver, plastic, or any combination of those materials. Wood piccolos are usually the best choice for orchestral work because they have a rounder sound; however, silver or plastic piccolos are much more popular in marching bands or other outdoor performances because they can withstand the moisture and temperature changes better than a wood piccolo can.

Though many think of the piccolo as a secondary instrument to the flute, it really has its own challenges and brings its own enjoyment. Apply yourself to learning to play the piccolo in its own right, and you can become a specialty player on this fun instrument.

The alto flute has many predecessors, dating back through the Renaissance. As flute makers worked to increase the range of the flute, they tried designs for a lower toned flute in Bb, A, Ab, G, F, Eb, and C. The development of the alto flute was also complicated for physical reasons. Lengthening the flute meant expanding the distance between the key holes, as well as between the embouchure hole and the keys, making it difficult for flutists to hold and to play.

The alto flute really settled on what it is today with the work of Theobald Boehm, who developed a system of correctly placed tone holes with a rod-axle mechanism, what we recognize on any flute 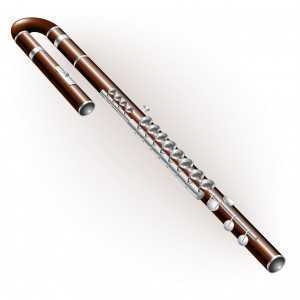 today as the finger keys. Boehm also recognized that just lengthening the C flute was not the way to create a great sounding instrument. Instead, he developed an alto flute that was in exact proportion to the C flute, creating a much more consistently beautiful sound.

The alto flute sounds in G, a fourth below the C flute. It is a transposing instrument, meaning the music is written in C and the instrument sounds a fourth below. It is usually about 34 inches long. To play the alto flute, flutists must use a slightly more relaxed embouchure and gentler air stream than for the C flute. The finger keys are still slightly spread from the C flute, but this is much less noticeable than in early versions.

The alto flute is popular among recitalists. It has been used to accompany singers, and since the 19th century, it has been used in solo and chamber music, as well as orchestral works.

The least known and least played of the flute family, the bass flute has an obscure reputation, but certainly isn’t a type of flute to overlook. The bass flute sounds a full octave lower than the C flute and has a full, round sound. 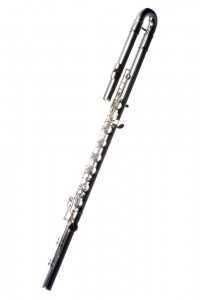 The bass flute has always been a novelty. Partially this is because of the real challenge of designing such a large flute. The size of the bass flute has differed, usually being made anywhere from 50-60 inches in length. Flute makers have tried many different ways to accommodate the long length and heavy weight of the bass flute.

Most modern flutes use a U-bend head joint to place the embouchure hole closer to the finger holes, but many other types of construction have been attempted. Some bass flutes have been made with two bends in the head joint and the fingers holes extending vertically. This gives the bass flute a look more like a saxophone, but the sound is still made by blowing across the embouchure hole, rather than into the instrument. Other bass flutes have also been made with the tube of the flute bent diagonally below the embouchure hole and a brace which could rest on the player’s thigh to help support the instrument’s weight.

Because of these problems, it is still rare to find a bass flute part written in to any large work. Bass flute is primarily used in flute ensembles or special commercial orchestrations.

Flute Choir and Beyond….

When most people think of the flute, they only think of the concert flute, but the truth is the many types of flutes that make up the flute family are diverse. Though some have said the modern flute choir, which utilizes all of these types of flutes, is something only a flute player could love, the music written for flute ensembles really harnesses the strength of each of these unique instruments to create a truly unique sound.

Lisa is a writer and editor specializing in aviation and the arts. She earned a minor in Music at Waldorf University in Forest City, Iowa where her study focused on flute, piccolo, and soprano and tenor recorder. She is a general contributor to the Musika blog.

2 thoughts on “Types of Flutes: The Modern Flute Family”