When you think about it, telling someone that you “play the trumpet” is kind of like saying that you “play the keyboard.” The statement could mean a number of things. A “keyboardist,” for instance, includes musicians who play the piano, the organ, the synthesizer, the celeste, or something else, and many play all of the above. Welcome to the life of a trumpet player. 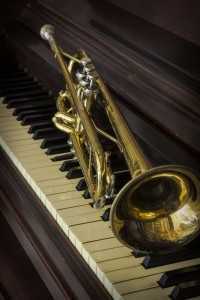 You’ve probably heard of the B Flat trumpet, the C trumpet, and the piccolo trumpet. But what do you know about the natural trumpet, and did you know that some trumpets used to have slides?

In this post we will explore the different kinds of trumpets, where they came from, and the performance practice traditions of each. Enjoy!

Different types of trumpets have been around for a long time, and by a long time, we mean over 3,000 years. They haven’t always been as musical as they are now though: ancient trumpets were used as hunting horns, war calls, and signals for the arrival of royalty. Some scholars believe that trumpets were even used by the Egyptians in 1500 BC.

In all likelihood, the trumpet wasn’t used musically (at least in our sense of the word) until the Renaissance, but the most basic purpose of the instrument—making a brassy sound—has existed for millennia.

Types of Trumpets: The Natural Trumpet

Once upon a time, in a galaxy far, far away, trumpets had no valves. If you practice natural slurs in your daily routine—and you should—then you already know what playing a natural trumpet is like. This was the way musicians played the trumpet during the Baroque era—entirely with lip flexibility.

The lack of valves meant that composers only wrote notes that were already in the harmonic series for trumpet players. In other words, trumpeters only had to play the notes that you can now play in an open position without depressing any valves. Unfortunately for our predecessors on the trumpet, composers therefore wrote trumpet parts much higher, since more overtones are available in the higher registers.

According to scholar Arnold Fromme, baroque trumpets were often made in the key of D, the most versatile key for trumpet playing at the time. Baroque D trumpets were also rather large; at eight feet in length (if the tubing were to be all straightened out, of course), they double the length of the modern B♭ trumpet.

Slide Trumpets came into being during the Renaissance period—most likely during the mid-15th century—and they were a bit more cumbersome than you might imagine. It didn’t initially have the modern sliding appendage that you find on trombones; rather, the player essentially held the mouthpiece in place while moving the body of the instrument back and forth.

Designers did improve upon that original design though. Surprisingly enough, the slide trumpet remained popular in England until at least the mid-19th century, thanks to its use by the well-known trumpeter Thomas Harper and his son. You may also find it interesting that the well-known instrument maker Adolphe Sax crafted a slide trumpet after the English fashion around 1850—unfortunately for him, French players (he was based in Paris) preferred to use more modern trumpets with pistons.

Now that we’ve given an honorable mention to a couple of our ancestors, let’s move on to some trumpets that use valves. Believe it or not, valve trumpets weren’t even established until the 1820s, when Josef Kail, the trumpet and trombone professor at the Prague Conservatory, acted as a champion for valve trumpets.

Worth mentioning is the fact that Kail, according to Oxford Music Online, helped develop valve trumpets in the early 1820s and 30s. Whether or not he had selfish motives is irrelevant at this

point; Kail put his money where his mouth was by commissioning the first pieces for valve trumpet, and the rest, as they say, is history.

Two main schools of valves exist today among the various types of trumpets: rotary valves and piston valves. Rotary valves (flat valves with a shape resembling a teardrop) are more available in

Germany and Austria, while piston valves are more common elsewhere. Piston valves are the stem-like valves with a button-like cap on top.The three valve system had a big flaw, though—as players used more valves in combination, the pitch went continuously sharp. All you have to do is play a C# with the 1-2-3 combination and you’ll remember how hard it can be to keep certain valve combinations in tune. Compensating systems, which first appeared in the 1850s, added tubing length with certain valve combinations (often adding more valves), and such systems continue to be important to low brass instruments today.

Trumpet players, on the other hand, compensate by utilizing finger rings on the slides to quickly and efficiently manipulate the slides on troublesome notes, thereby keeping the pitches in tune.

Types of Trumpets: The B♭ Trumpet

On to one of the types of trumpets that modern instrumentalists actually play—the B♭ trumpet.

The B♭ trumpet’s tubing is the largest of the commonly used trumpets; stretched out, it reaches slightly more than four feet in length. Due to the length and size of the tubing, B Flat trumpets have a darker, more mellow sound than the C, D, E Flat, and piccolo trumpets. In the United States, most wind/concert band and jazz music is performed with B Flat trumpets.

Around the year 1830, the B Flat cornet was introduced—this got trumpet players of the day thinking. Most valve trumpet music in that era had been played on cumbersome F and G trumpets, but the increasing difficulty of trumpet parts and solo music encouraged many trumpet players to switch to B Flat and C horns. Because they were smaller than F and G trumpets, the B Flat and C horns played with much more agility, a trait players were beginning to need due to more difficult compositions.

Since the B Flat cornet got a head start on the newer trumpets, though, Oxford Music mentions that the cornet almost overtook the trumpet in orchestras and performing ensembles. Although the trumpet did manage to maintain its place of prominence, the fact remains that without the influence of the cornet, trumpet players would have likely continued trying to play modern music on the large F and G trumpets of the day.

German trumpeter A. Kuhnert gets credit for introducing the B Flat trumpet to Germany in the mid-19th century, according to Grove Online.

The C trumpet followed a similar pattern to the B flat. Several years after the B Flat trumpet was popularized in Germany by A. Kuhnert, the C trumpet found its way in the Paris Opera. The year was 1874. Oxford Music states that by the year 1890 the F trumpet was all but extinct, except for the Royal College of Music in London, which stubbornly continued teaching it for several years past the turn of the century.

For all practical purposes, though, the B flat and C trumpets arrived on the scene around the same time and with the same goal—to usurp the F and G trumpets with superior accuracy and agility. The C trumpet, over time, found its way into orchestral playing because of its slightly brighter sound. The C trumpet is pitched a step higher than the B flat (due to slightly shorter tubing), and as a result, the tone projects a little bit more than the B flat. Apparently, that slight increase in brightness is important enough that the C trumpet is now the instrument of choice for American orchestral players. Transposing trumpet music while playing a C trumpet is not difficult, since the difference is only one step.

Once instrument makers realized they could essentially make a trumpet for every occasion, a D trumpet came onto the market; this was right on the tails of the B flat and C trumpets bursting onto the scene in the mid 19th century. Starting in 1861, D trumpets gained more and more momentum among soloists performing Baroque music. Handel’s Messiah and Bach’s B Minor Mass were popular works for the D trumpet. 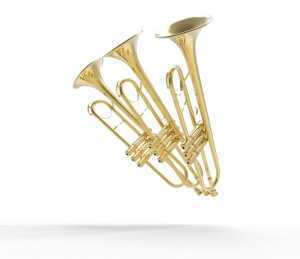 D trumpets have a bright sound—almost piercing—somewhere between the timbres of the C trumpet and the piccolo. Ravel and Stravinsky, among other composers,  wrote music with parts specifically for the D trumpet. Performers don’t use D trumpets for the sole purpose of getting more range—it really only adds a few notes to more traditional trumpets—but the brightness of the tone and the consistency in the higher range made it ideal for performances of Baroque music in the days before the piccolo trumpet.

If you plan to perform the Haydn and Hummel concertos, you will probably have to learn them on the E Flat trumpet. While they can be played on a B Flat horn, the E Flat is the traditional trumpet of choice, mostly because the technique is easier on the fingers when played with an E Flat trumpet. The trills in particular play smoother in E Flat.

Besides the obvious transitional period when playing in a new key, players may have difficulty adjusting to the intonation of the E Flat trumpet—once mastered, though, the crisp sound is worth the effort.

Last but certainly not least among the many types of trumpets, we have the piccolo trumpet. It has all but replaced the D trumpet in modern times, especially because the 4th-valve option on the piccolo gives it an extra perfect-fourth of downward range. Furthermore, piccolo trumpets now come with a leadpipe extension which can be used to put the horn into the key of A. Baroque music and even orchestral pieces like Ravel’s Bolero, which was originally written with D trumpet in mind, are usually played on piccolo trumpet now.

There you have it—being a trumpet player is even more complicated than being a “keyboardist.” Maybe it’s even harder than the lineup of instruments a percussionist must juggle, since percussionists don’t have to transpose between each instrument!

And remember, you don’t have to play every trumpet to be successful, as most players now use piccolo trumpet rather than the aforementioned D trumpet. And unless you decide to play the Hummel or Haydn concerto, you won’t have to use E flat, either.