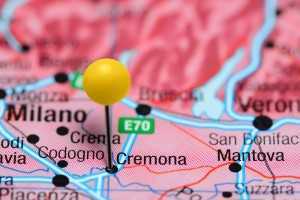 What is a Cremona violin? Well, you’ve probably heard of a Stradivarius. Maybe one of your favorite professional string players uses a Guarneri, or an Amati. But did you know that all three of these violin makers were from the same city in Italy?

Cremona: this is where the modern violin was first created and popularized. Why Cremona? For a couple of good reasons.

The Beginning of the Modern Violin

Modern violin making seems to have started with Andrea Amati (1507 – 1577)[1]. Roger Graham Hargrave, a violin maker, cites that Amati was an accomplished luthier (violin maker) by 1525.[2] And many sources record that Amati was pivotal in the shaping of today’s current instrument. John R. Waddle, a luthier (maker of stringed instruments) in St. Paul, Minnesota, explained in a telephone interview that Amati’s creation of the arch in the top and back of the violin, as well as the modification of other elements of the instrument, contributed to the new violin’s success. This was the start of the Cremona violin legacy.

Andrea Amati passed on the luthier skill to his sons. His grandson, Nicolò (1596–1684), is credited as being the most famous instrument maker of the family. And it was in Nicolò’s workshop that craftsmanship was taught. Andrea Guarneri (c. 1626 – 98) was an apprentice in Amati’s violin workshop. Antonio Stradivarius (1644?-1737) might have worked there too.

Cremona, at the turn of the sixteenth into the seventeenth century, had a thriving culture of music. The composer Claudio Monteverdi (baptized in 1567, died in 1643) was born in Cremona and trained at the cathedral with the director of music, Marcantonio Ingegneri. Monteverdi published two full books of music as a teenager. By 1590, Monteverdi was employed as a string player for the Duke of Mantua.

And this is exactly how the Cremona violins were promoted throughout Europe. John Waddle noted that “Cremona [was] where the musicians were. They were good.” From Cremona, these musicians and their instruments went all over Europe – Vienna, Paris, and Prague, to name a few. Catherine de Medici (Queen and later Regent of France) was a great promoter of the arts, and her son, Charles IX of France, ordered 38 instruments from the Italian Amati.

Guarneri and Stradivarius were well prepared for this culture that appreciated fine instrument making. Andrea Guarneri passed on the skill to his sons and his nephew. His nephew, Giuseppe Giovanni Battista Guarneri, (1698-1745), became the best known luthier of the family, and is today commonly known by the nickname “del Gesu” because he would print I.H.S. (Latin abbreviation for “Jesus, Savior of Man”) on his violin labels.[3] According to Encyclopedia Britannica, the virtuoso violinist Paganini enjoyed the ‘robust’ tone of Guarneri del Gesu’s instruments – Paganini’s Guarneri violin is now displayed at the Palazzo Municipale of Genoa.

Stradivarius:  The Peak of Perfection

Antonio Stradivarius also had a very long and fruitful life as a luthier. His original birthplace and birth date are unknown, according to the 1915 edition of the Groves Music Dictionary. Due to an outbreak of plague in Cremona, Groves suggests that Antonio Stradivarius’s parents and older siblings may have fled to a different town in order to escape the illness that wiped out much of the Amati family.

However, Stradivarius was making violins by 1666, when he was 22 years old. Groves explains that Stradivarius had the habit of including his age on the label when he would finish an instrument. For someone who marked his age as “89” in 1736 and “93” in 1737, we can tell that this artist didn’t let age slow down his skills.

Stradivarius is believed to have perfected the modelling and reshaping of the violin that Andrea Amati started back in the 1500s. Stradivarius’s instrument designs varied over time – he changed the type of varnish, the styling of the bridge, and the proportions of the violin body, for example. But his later Cremona violins are generally thought to be his best, and these are the instruments upon which many modern violins are designed.

How the Secret Vanished

What made Stradivarius’s violins so good? For many years, it was thought that the varnish was the key. Grove says that Stradivarius evidently wrote the recipe for the varnish “on the fly leaf of a family Bible.” A relative, Giacomo, destroyed the recorded recipe but reportedly kept his own copy, in case a later family member wanted to try his hand at violin making. But where that secret recipe went, no one knows.

However, today experts also believe that at least two other factors affect the quality of the Stradivarius sound. Those factors are the condition of the tiny pores within the violin’s wood and the thickness of the back and front of the violin. That, and the varnish all contribute to the construction of these magnificent violins (Encyclopedia Britannica).

Stradivarius died in 1737. His sons, Francesco and Omobono, kept the business going until they died in 1743 and 1742, respectively.

In his lifetime, Antonio Stradivarius created or supervised the construction of approximately 1,100 stringed instruments. World Book Encyclopedia says that “about 635 violins, 17 violas, and 60 cellos still exist.” As a comparison, from the Guarneri family, only about 160-170 violins are left that bear the true “del Gesu” imprint (Hargrave, “Amati, Stradivari and Guarneri”).

Where the Instruments Are Today

And some of the Cremona violins are kept by collectors and musicians. The Stradivari Society maintains a program that links owners of valuable violins with promising musicians. The program began when teacher Dorothy DeLay wanted to find a high-quality instrument for her preteen pupil, Midori. The young violinist was given the chance to play on the “David” Guarneri del Gesu. She won the right to borrow the instrument, and went on to a world-famous career in violin.

Today, in order to borrow one of the Stradivari Society’s instruments, the musician is contracted to use the instrument only if he or she can pay for the insurance on it. The borrower is also required to perform three concerts per year for the sponsoring patron. The instruments are subjected to three exams every year, by the restorer and curator of the Stradivari Society. That way, the Society can assure both the lender and the borrower that the instrument has been kept in the best of care. And the number of famous musicians who have been a part of the program is quite impressive – Gil Shaham, Hilary Hahn, and Sarah Chang are just a few of the names on the list.

Frequently, the musician who owns or plays the Cremona violin (or viola or cello) leaves his name with his instrument: the Ex-Gingold Stradivarius, for example, was played by Josef Gingold, who also taught at Indiana University. His instrument is now a part of the International Violin Competition of Indianapolis, Indiana. Fritz Kreisler’s Guarneri, the Ex-Kreisler, is now kept in the Library of Congress collection.

The Violin: A Piece of Practical Art

Why are the Stradivarius, Guarneri and Amati instruments still revered today? “That’s a great question,” Waddle said. “It’s similar to why people talk about Rembrandt or Picasso. These men were

masters of their art – they put their whole souls into their [work],” he explained. “[They were] innovators.”

The thing to keep in mind, though, is that each instrument from the old masters is a unique creation. The makers were testing new ideas as they created their instruments – and some experiments worked better than others.  “They were not all created equally…” Waddle explained. “Each has its own personality.”

For example, today, a standard full-sized violin will have a body that is 14 inches long. However, the neck and other parts of the violin can definitely be different, so that people of different builds can find a comfortable instrument that fits.

The same concept of fitting the instrument to the player was also true for the Italian masters. There are still small and large models of the Cremona violins. It is possible that some of the smaller-sized instruments could have been made by special request, perhaps for the use of an aristocrat’s child. (Although there were student or child-sized instruments during that time, not many have survived to this day, Waddle noted.) Other instruments were probably made to order, based on the unique needs of each customer, like tailoring a coat to your specific measurements. “There’s a whole lot we don’t know about these shops,” Waddle said.

It is important to keep in mind the fact that no single luthier made all the instruments. “It wasn’t just one guy – sons and more workers [helped out]” Waddle clarified. Likening it to a DaVinci or Rembrandt painting, he explained that the master might have made a part of the instrument, but other people in the shop probably completed the rest of the work.

“It’s amazing how many [instruments the Stradivarius shop made]” Waddle commented, explaining that that shop was turning out a new instrument every two weeks. And instruments were not limited to violins – violas, cellos, harps, guitars, bows and instrument cases were also manufactured there. “I think he was a total workaholic!” Waddle laughed.

Many of the Cremona violins that are still around today have been modified to suit the needs of the modern musician. For example, violin strings now are made of wire instead of gut, which requires stronger support inside the violin. Violin finger boards have grown longer, and chin rests have been added. With these modifications, the instruments are better able to compete with modern orchestras and concert venues.

But for a very few of the Cremona violins, modifications have gone backwards. These instruments have been restored to be more like they were when they first were used – the Metropolitan Museum of Art’s “Gould” Strad is an example.

Whether a musician is able to use a modified or a restored instrument, the fact remains that playing and listening to any of the early Cremona violins is a rare opportunity. Cremona, Italy, had a wonderful opportunity to bring a new and improved musical instrument to the world. And her citizens – Amati, Guarneri, and Stradivarius (and their families) – did well.

Violins for Beginners: To Rent or to Buy?

Must Have String Instrument Accessories

What to Look For When Selecting a Violin

Louisa Danielson, B.S. Music, is a contributor to the Musika blog.