Originally from Thailand, I have performed in various professional and festival ensembles including around the world, including Akron Symphony Orchestra, Siam Philharmonic Orchestra, Bangkok Opera and Philharmonic Winds (Singapore). I was a member of Spoleto Festival USA in 2016 and 2017, and, in 2015, I participated in Aspen Music Festival. I have earned honors and awards such as Winner of Concerto Competition at Texas Christian University, Cleveland State University, Winner of Rangsit University Solo Trombone Competition, and finalist American Trombone Workshop Division III Bass Trombone Solo Competition in 2015 and 2016. I am currently in the Doctoral program at University of North Texas, studying under Professor Tony Baker. I received Artist Diploma at Texas Christian University studying under Dr. David Begnoche. Also, received my Masters degree from Cleveland State University studying with Shachar Israel, Assistant Principal Trombone of the Cleveland Orchestra, and hold Bachelor degrees from Yong Siew Toh Conservatory of Music and Kasetsart University, where my teachers were Shannon Pittaway and Teerapol Submool. I have also participated in Pokorny Low Brass Seminar in 2018, Cleveland Trombone Seminar in 2015-2017, Summer Trombone Workshop in 2015 and the Alessi Seminar 2014 in Fossano, Italy. I have attended master classes with renowned trombonists such as Nitzan Haroz, Toby Oft, Stephen Lange, Blair Bolinger, David Taylor, Haim Avitsur, John Rojak, Randall Hawkes, Zachary Bond, Dr. Denson Paul Pollard, Brain Hecht and Joseph Alessi.

I have been teaching lessons since I studied back in Thailand, Singapore, and United States. Currently, I am teaching high school and middle school in Dallas-Fort Worth area. Through teaching, I have enjoyed watching my students succeed and overcome their struggles. The process of experimentation has been a learning one for both my students and myself. I believe that a deeper understanding of music history and music theory is necessary for my students' success in achieving a more sophisticated level of musicianship.

For Beginner, I usually use Hal Leonard's Essential book for younger students and Rubank's elementary book for older students. These books can use up to intermediate students and some easy solo pieces from the trombone gems collection by H.A. VanderCook. For intermediate to advanced students playing trombone for more than two years, I would use Melodious Etudes for Trombone Selected from the Vocalises of Marco Bordogni book one and Arban Complete Method for Trombone and Euphonium. These books will work on both musicality and technical on trombone. Also, help students with any help they need, for example, solo or band music, audition repertories for school audition, and music festivals.

I like to encourage the students to work on fundamentals. To make this not too dull, I use pop music to help them understand the pitches and rhythm, then work on sound by singing and playing. These will allow students to have a solid foundation and easy to develop further in the future. Listening is the central part of success; this helps with music styles, tone production, and interpreting the music to what composers want. Practice does not make perfect but deliberate practice is always the goal. 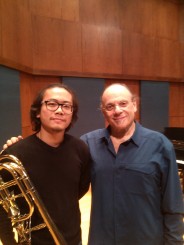