Overview:
I am a dedicated, passoniate, and serious musician who wants to share my love of musical creativity with the rest of the world and the coming generations. I graduated from North Carolina Central University, Magna Cum Laude, in 2007 with a Bachelor of Arts in Music Education. I completed my first album, Magna Carta, in 2009. I taught music in Robeson County, North Carolina for four years, but left due the high crime and the lack of support I experienced as a music teacher. As a musician, I have performed several self-financed and self-planned tours through the South, Northeast, and over the East Coast. I have performed over fifty concerts in 11 states, including North Carolina, Massachusetts, New York, New Hampshire, Vermont, Rhode Island, Tennessee, Maine, Mississippi, Georgia, and California. Notable artists I have shared concert bills with have included Kayla Nettles, who later became a contestant on "American Idol," and Eli James, who has since become the touring drummer for Julien-K. One of my Reverb Nation fans is none other than 80s heavy metal queen Lita Ford.
EXPERIENCE
I have taught all grades Pre-K all the way through 12, and have taught guitar, harmonica, and piano to learners from age 7 up to 60 and beyond. I have creative ways of communicating my thoughts to my students, allowing them to think beyond the familiar and truly understand music in a unique way. My lessons with my students are individualized, and designed to cater to student's unique abilities in lieu of a one-size-fits all approach. As a musician, I have performed and studied a wide array of music, including rock, jazz, classical, country, bluegrass, blues, rap, reggae, R&B, and world music. This gives me a broad insight into relating to students of different backgrounds and with different interests, allowing them to create and ultimately reach their own specific goals.
METHODS USED
My choices in books and other resources for the student are based primarily on the students' individual goals, needs, and interests. Generally, I approach the subject matter with firm but relaxed expectations, giving the students freedom but also requiring them to pursue a specified goal. This may include allowing the student to take a break from a challenging piece if necessary, to let their mind calm down and refocus while they practice a different piece with different requirements. For guitar, I prefer the students to use Mel Bay's Chord Book, as it is still the best I have ever been able to find. As the student progresses, I work to assess their various tastes in music, and work towards that direction, while introducing outside material they may enjoy, with the intent of eventually having a recital.
LESSON STYLE
I have loved music ever since I was three and picked up two fallen tree branches, pretending they were a violin. I want my students to have a good time and enjoy the lessons. All students learn at their own pace, and have different reasons for being excited about music and why they want to learn their instrument. I want to function as both a friend and mentor to my students.
PHOTOS & VIDEOS
prev 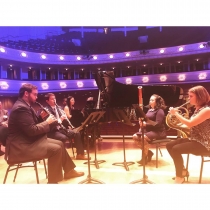 It's very good experience. Skyp is very responsible, always on time and Jean, my son, is learning very fast. Thanks!