I’m Patrick R.; musician, teacher, and tinker-er. Music has been both my catalyst for cultural communication and my foil for scientific toil. Born and raised in Tulsa, I was first surrounded by the country/rock of orthodox white suburbia. The only music in the haven of All Souls Unitarian was still all organ and choir. Utterly bored by studio piano lessons, I started taking drums at a local music store at the end of 5th grade, right when my world opened up. Moving from the public elementary school in the suburbs to urban magnet middle- and high-schools downtown, drums went from a retail hobby to a practice of cultural exchange and personal empowerment. My teenage explorations of punk and metal became immersed in and jams of the jazz roots and hip-hop futures of Tulsa’s historically progressive-black Greenwood district. Taking courses at Booker T. Washington in Jazz band, Concert Band, and MIDI-based Electronic Music, I learned to translate rhythmic ideas written chats, live jams, and/or mechanical drum machines, turning these barriers into bridges. Playing percussion for services at Tulsa’s Unitarian Church of the Restoration, I learned to study and play rhythms as both a form of language and (rather loud) meditation. From there, I went to college in Oberlin OH, majoring in Psychology while moonlighting in bands with players in Obserlin’s world-class conservatory, serving an audience of peers from around the world. In and outside of Oberlin’s music tech program, I began to study and use drum machines, MIDI and looping. While purist drummers and other musicians consider these rhythm machines as “soul-less” threats to human drumming, I’ve embraced them as tools to expand my expressive and compositional potential, and used sequencers, electronic drums, and other gadgets w/ my drum kit. I even took Oberlin’s music tech classes in analog and digital circuit design to better modify/repair existing instruments, or customize and design my own sound tools behind and beyond my drumset. Settling in Philadelphia, I’ve continued to rotate between 3 legs of: 1) Teaching academic courses and/or private music lessons. 2) concert production…(previously working at the World Cafe Live, and now working for the Local 8 chapter of IATSE stage-hand union) 3) research/development in music technology,

In my 30 years as a drummer/musician, whether authoring, performing, or recording music, I’ve consistently pushed myself to explore new styles, techniques, and approach. My first grade-shool hands were with my then-step-brother, moving from simple punk to more melodic surf-frock to lush psychedelic rock. Across increasingly noisy and experimental bands, I quickly learned to serve powerful, solid time. As we recorded our projects on the lo-fi 4-track tape machines of the day, I became increasingly responsible for not just my performance, but the shaping of my drum part in the mix. Entered my first proper studio in 2000 to record a 4-song EP with with The Wax Dolls. Following the older siblings departure to college, the remainder of the band regrouped as PipSqeak. As the sole male in that “riot girl” project, I enjoyed learning to write and play more restrained and sophisticated parts for the shifted tone and leadership in the band. After PipSqueak recorded the EP “Prom Queen;” the song “Alone at the Rock Show” got my first radio play on Tulsa’s Z104.5, and we even shot a (unreleased) video with then-student Tulsa videographer/journalist Paul Taggert. After PipSqueak disbanded, I finished high-school exploring ska and punk music in the band PickUpChix, in which I did my first out-of-state tours, taking a van from Tulsa to play college shows as far as St. Louis. Outside of the band, I challenged myself to learn the rhythmic signatures among other cliques of friends, from the speedy double-kick footwork of death metal to the machine-rhythms of 90s hip-hop. I went to Oberlin College in Ohio to work w/ conservatory-grade musicians from globally varied styles and backgrounds. While I was not a Conservatory student, I majored in Psychology through the College party to have enough flexibility to take electives in electronic music, dance classes (for which I also played accompaniment) and eventually work in the student union’s Live Sound production crew. My first college band, modern-ska sexted Both Heads Failed, a mix of College rhythm section and Conservatory horn section, was a regular feature at school talent shows, and did a smattering of inter-state touring. When recording our demo (for a fellow student’s studio project), I took additional responsibility in our studio production. Before leaving college, I formed noise-rock outfit Robot Versus Dinosaur to explore performing purely-improvised music based on things I’d learned from dance classes and live jamming. Graduation led to Philadelphia, where I interpreted pre-written drum-loops live for female-fronted pop band SubStatic. I then reconnected w/ step-brother to serve his MusicForHeadphones project for some 5 years, touring interstate and recording 3 albums, serving the project to focus on getting a Masters in Electrical Engineering at Drexel University, to research signal projecting, new forms of musical interfacing, and the educational potential of music video games. After graduating in 2010, I spent another year in live sound. Seeking new music to challenge my ear and muscles, I joined doom-metal band WormRider, learning to at the extremes of loud and slow. During my 2 recordings with this band, I assisted w/ studio production of not only my drum sound, but guitar and vocal production, and mastered our final mix for release on cassette tape. I spent 2011-2017 as a professor in the Audio Production (and other) department(s) at the Art Institute of Philadelphia, teaching courses in electronics, acoustics, live sound, editing, and sound design. By 2015, I was writing/recording w/ singer-songwriter Chris Panico, challenging my musicianship by composing on drum-machines and loopers, loops, then interpret them live on drumkit and electronics. In 2018, I started teaching drum lessons both privately and through Philadelphia’s original School of Rock, as well as adjunct-teaching recording classes at the Boyer conservatory at Temple University. In 2019, I started drumming for cover songs for the Music Ministry at First Unitarian of Philadelphia (FUCP), drumming for 9 services before the Pandemic of 2020 shut down our live church music. I then lent my production and teaching skills to help lead the FUCP to provide remote-workship music: recording drums, preparing guide-tracks, and editing and/or mixing songs (while training others to do the same), contributing to over 30 of the FUCP’s music videos between 2020 and 2022. I continued support the FUCP’s 2022 transition into hybrid worship, playing in ensembles and/or working backstage mixing live band live sound for audiences in sanctuary and over video conference simultaneously (while teaching others to do the same). During the Pandemic, I expanded my home-studio with multiple cameras and custom headphone mixing for immersive lessons for remote-video students, and eventually for the returning in-person drum students.

I combine traditional technique and modern A/V technology to teach immersive drum-lessons that accelerate the student drummer’s skill, musicality, listening, and notation literacy. While I may reach for a book to cite exercises from books like GL Stone’s Stick Control or example patterns from Hal Leonward’s The New Breed, I do not teach “by the book” for my students. Instead, I survey student’s inspiration, goals, and learning style to progress from their passion first, with a focus on learning the drum parts of the songs they love, both by ear and charting in notation. For all students, I eschew learning “specific beats” of specific songs, and instead teach them to hear/play/read/write beats from generic forms to specific variations. For this, I’ve adapted my system of “Seven Shapes” for rhythmic permutation. For beginner students, we focus on hearing pulse, counting meter, and simple rudiments for basic stick control. Beginners learn basic rock beats, first one limb/voice at a time, then combing all parts into the complete drum set rhythm.. Students are encouraged to “say the play” of each voice independently to foster coordination independence as conscious control. My “Seven Shapes” system provides foundation for the commonalities and distinctions across whatever course of songs they study. For more intermediate students, we take on more challenging songs, exercise greater stick control w/ compound rudiments, and chart entire drum parts of whole songs. Intermediate and Advanced students focus on the specific motifs and skills of more distinct and challenging drumming; speed/endurance for punk/metal, groove and phrasing for hip-hop and pop 4-way independence for latin and afro-cuban, shuffle feel open/improvisational song-form for blues and jazz, Advanced students also learn odd-meter, poly-meter, polyrhythms and ostinato from both traditional African/Indian musics and contemporary progressive examples. My Seven Shapes system to greater rhythmic precision w/ arbitrary subdivisions of beat and more advanced integration of styles by remixing existing patterns, both in notation and on the instrument.

From my coursework as a Psychology major in college, I take care to connect with the specific enthusiasm, learning style, and pacing of each student. I’ve remediated some of my lessons to better serve students who learn only-by-ear and pay with eyes closed VS others who have-to-read to coordinate themselves. From my graduate-school research in music-education through interactive media and video games, I seek to maximize the importance of immersion and unbroken flow while playing, and the thinking/feeling/knowing/playing of learning without having to stop playing. Hence, I’ve developed a teaching studio that gives the student an immersive audio/video supplement. Their sound feed includes song audio, my live voice-guidance, and/or metronome, and a video feed from 4 cameras, from kit overview to focus on feet or the white-board for notation. In Fall of 2021, I produced the following promotional video for my service in-person and/or remote lessons to learn and enjoy the drum kit. Lessons notes, goals, media, and billing are all integrated in paperless logs through Google Documents, and lessons are scheduled and tracked through Google Calendar. Beyond the specific psychology or technology I may use, I serve my students to celebrate progress, prioritize patience, and develop discipline in both mind and body. I always try to keep things fun, so that “playing the drums” always feels playful PLAYful. 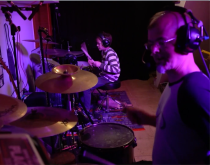 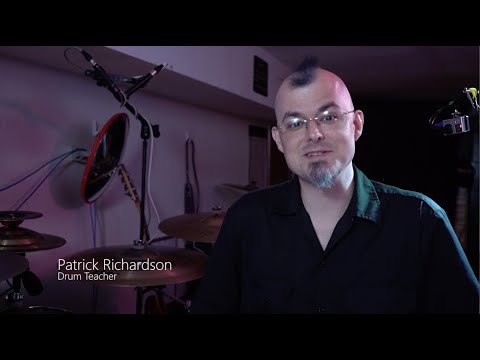