I am a cellist that enjoys a diverse career as a soloist, chamber and orchestral musician, and pedagogue. As a chamber musician, I have performed across the United States and internationally. Some highlight engagements include the Embassy Series, Savannah Philharmonic Chamber Music Series, Luzerne Festival Series, The DiBlasiis Series at the Hyde Museum, Chamber Players International, Chateau Festival in Paris and Berlin, Mohawk Trails Concerts, Interlochen Faculty Chamber Series, and at Carnegie Hall with both Amazonas and the Larchmont Chamber Players. I have toured with Eric Genuis’ Concerts for Hope, performing piano trio music in state prisons across the US. I have been a soloist with the Valley Winds, Holyoke Civic Symphony, Interlochen Arts Academy Choir, and a featured performer with the Opus One Chamber Orchestra, Purchase Symphony Orchestra, and New York Virtuosi Orchestra. I have been guest principal cello with the New York Chamber Players, Mid-Atlantic Symphony, Glens Falls Symphony, Garden State Philharmonic, and performed with the cellos sections of the Savannah Philharmonic, Monteux Festival Orchestra, Brooklyn Metro Chamber Ensemble, Long Island Concert Orchestra, and New York Metamorphosis Ensemble. I frequently premiere and performs works of contemporary composers. I have had the opportunity to work directly with numerous composers including Pulitzer Prize winner Paul Moravec, Nick Virzi, Felipe Salles, Nick DiBernadino, Shelley Washington, Gemma Peacocke, Rob Deemer, Saad Hadad, William David Cooper, Matthew Recio, and Masatora Goya. I have performed on such series as Bargemusic: Here and Now, Fordham University at Lincoln Center Concerts, Luzerne Faculty Concert Series, the Composer's Voice, and Interlochen New Music Series.

I have been teaching for over 10 years as a faculty member at community music schools, as a chamber music and orchestral performance coach, and as an adjunct at Purchase College. My students have been accepted to college conservatories with scholarship, have perform solo at Weill Recital Hall and Symphony Space, had many successfully audition for youth orchestras such as New York Youth and Westchester County Orchestra, and have had individuals receive score high marks at NYSSMA that earned them entrance to All-County and All-State. I have also spent my summers teaching at such music festivals as Luzerne Music Center, Interlochen Center for the Arts, and NYSSSA School of Orchestral Studies. My duties included teaching students aged 9-19 private lessons, coaching up to three chamber ensembles daily, conducting orchestral sectionals, and rehearsing from within the orchestra. My summer students there have been concerto competition winners, were granted opportunities to perform in the student showcase and for donor events, sat as section leaders in the orchestra, and performed in masterclass for cellists of the Philadelphia Orchestra and for the Johannes Quartet.

In private lessons, through the assignment of scales, arpeggios, technical exercises, etudes, and solo work, students gain a progressive yet sound understanding of technique. Students develop an internal map of the fingerboard, learn how to accurately and consistently arrive in positions, have the flexibility of creating their own a fingerings, understand the fundamentals of sound production, bowing styles, and how to use these techniques as an aid to music making. They also learn basic music theory through their repertoire, as well as practice techniques progressively and independently, learning how ‘build’ a piece to expedite the learning process.

I have worked with students ranging from ages 5 to 80, with varying ranges of motivation, discipline, drive, and family support. It is my goal as a teacher to train well-rounded students who not only enjoy music making, but are cognizant of what goes into the learning process. Together we develop a set of reliable tools to solve the problems that will arise in a uniquely tailored curriculum, dependent on their individualized learning style and goals, to make the most fruitful experience possible. 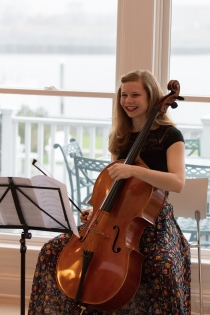 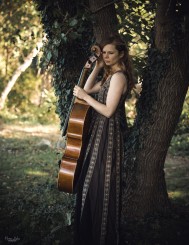