At the invitation of renowned pianist Arnaldo Cohen, Moises performed a solo recital for a full audience at the prestigious Sala São Paulo. He has also collaborated with artists such as Dennis Parker, Kevork Mardirossian, Fernando Hasaj, Ney Fialkow, Onorio Zaralli, and Anatoly Sheludyakov. Moises also performed alongside Grammy-Award winner Craig Hella Johnson, being featured as the solo violinist in his latest work "Considering Matthew Shepard".

Moises Cunha a B.M and a M.M from Indiana University Jacobs School of Music where he was a recipient of the Fulbright Scholarship, Conrado Wessel Foundation Scholarship, The Scott C. and Kathrin Schutz Latin American Scholarship, and the Artistic Excellence Award. Moises completed the D.M.A. at University of Georgia in the spring of 2018. His primary mentors include Mauricio Fuks, Kevork Mardirossian, and Levon Ambartsumian.

Moises is passionate about teaching and educational outreach, and has given numerous masterclasses in schools in the United States and Brazil. He has given masterclasses at FUNDARTE and Pelotas Federal University, and frequently presents masterclasses and coaches chamber music and orchestra sectionals to the Orquestra Jovem Recanto Maestro in Brazil.

Moises is Artist-Faculty of the Greater New Orleans Youth Orchestra, teaching chamber music and working with the youth orchestra in rehearsals and sectionals. He also serves as a Guest Artist at Loyola, mentoring undergraduate and graduate students in orchestra repertoire. Dr. Moises is also violin instructor of the newly established String Program at the Crescent City Christian School.

Once I have identified students’ individualities, I acknowledge their strengths and focus my teaching on their weaknesses. For some, this may mean reevaluation of their posture and technique, as well as their consequent effects on tone production, shifting, intonation, and ease of playing. Many of the individual actions that make up technique can be broken down into several elements. The study of basics technical exercises is a practical way for students to overcome bad habits that have been ingrained over the years. For other students, on the other hand, my focus may lie on the historical and contextual elements of the repertoire, with special attention to composer's’ markings and their consequent effects on the student’s choice of phrasing, sound and vibrato. While I believe that a solid practice routine that combines basics and scales is vital for the constant improvement of the player’s overall skills, technical issues regarding bow distribution, smooth string crossing, shifting, left-hand articulation, vibrato, and tone production may also be dealt with in accordance to the repertoire.

I strongly believe in a flexible manner of instruction, depending on the student’s particular characteristics and musical temperament. Thus, my approach to teaching is different for each student. Some students possess a more “mechanical” way of thinking, and are not naturally comfortable expressing themselves in public. Others are more “artistic” and intuitive and do not possess the knowledge, organization and patience to overcome technical issues. Whether students are more “intuitive” or more “intellectual,” there is a common issue that many face: tension. The tension is often a result of a constricted physical, mental and/or emotional activity, causing students to feel frustrated and disappointed, preventing them from the desired results.

I believe demonstrating how to practice efficiently is equally important. In my years of teaching, I have observed that students who do not make significant progress are the ones who do not insert intelligence and judgment into their practice routines. For examples, if a student is having left-hand coordination problems in a fast detaché passage, it is very likely that he or she may be lifting the fingers too high above the fingerboard and/or not keeping fingers down whenever possible. While keeping the fingers down and close to the fingerboard, the student may gradually build up the tempo using a variety of different bowings and rhythmic groupings.

I strongly encourage students to balance their practice by studying scores, reading books and articles about music and other subjects, and attending concerts, master classes and lessons from their peers. I also strongly encourage the study and participation in orchestras and chamber ensembles. Performing in ensemble is an extremely valuable experience where students are not only able to learn, explore, and refine their skills as instrumentalists, but to foster healthy relationships with colleagues.

Ultimately, studying the violin is a lifelong process, and I hope to perpetuate cultural diversity, intellectual curiosity, discipline, respect and enjoyment. Moreover, I hope my teaching can help them discover their inner self and promote artistic freedom. 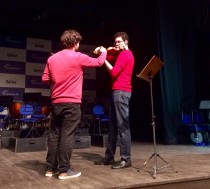 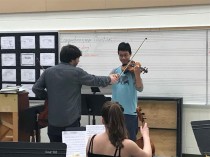