Composer of the Snare Drum Classics "Stamina", "Tornado", and the "Four Horseman" among others

Known as "The Teacher's Teacher", I'm passionate about teaching, helping students reach their full potential, innovative cutting edge teaching methods, and personalized curriculum for every student. Having taught many famous and national championship students, I love to pass on the desire and appreciation for excellence and Olympic level playing.

I personalize every lesson to the interests and ability of the student. I make everything very easy and understandable no matter what the playing level of the student.

I like to pass on my love and passion for drumming and teaching to all my students. I focus on positive motivation and reinforcement, and getting my students to envision and achieve their full potential. 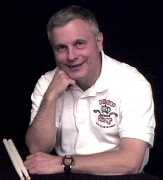