Overview:
My name is Maya Fields and I am currently pursuing an Artist Diploma at the University of Cincinnati's College-Conservatory of Music as a two-time recipient of the Graduate Incentive Award, a full tuition scholarship, where I study with Catharine Lees and Denisse Rodriguez-Rivera. My prior education includes studies at the University of Cincinnati’s College-Conservatory of Music as well as the Eastman School of Music, where I hold Master’s and Bachelor’s Degrees in Viola Performance. Additionally, I earned a minor in Russian language from the University of Rochester.    As an orchestral violist, I have held principal viola positions in several orchestras - the Cleveland Institute of Music's Preparatory String Orchestra, Cleveland Heights High School's Symphony Orchestra, Interlochen Arts Camp's Intermediate and World Youth Symphony Orchestras, the Contemporary Youth Orchestra, where she was a recipient of the Mark Jackobs endowed chair award, the Cleveland Orchestra Youth Orchestra, Eastman School of Music's Symphony and Philharmonic Orchestras, the Chautauqua Music School Festival Orchestra, the University of Cincinnati College-Conservatory's Philharmonia Orchestra, and the National Orchestral Institute. I have also had the honor of working with renowned conductors such as Marin Alsop, JoAnn Falletta, James Feddeck, Andrew Grams, Giancarlo Guerrero, Louis Langree, Jahja Ling, Brett Mitchell, Ruth Reinhardt, Osmo Vanska, Franz Welser-Most, and David Zinman.  I also holds a number of honors and awards. I am the first prize recipient of the 2011 state of Ohio's Viola Society Competition, a winner of Cleveland Heights High School's 2014 Concerto Competition, and have appeared as a guest artist on Interlochen's Public Radio as well as Cleveland Ohio's WCLV Ideastream. In June, 2019, on behalf of the Cleveland Orchestra, I had the honor of accepting an invitation to perform as a featured guest artist as part of the Cleveland Orchestra's Gourmet Matinee Series at the Blossom Music Center. I have attended the Interlochen Arts Camp, where I was a recipient of the Emerson Scholarship, the Bowdoin International Music Festival, the AIMS Festival, where I was an orchestral fellowship recipient, the Chautauqua Festival, where I was a two time orchestral fellow, as well as the National Orchestral Institute, where I was a recipient of an orchestral fellowship.  I am a founder of Project Build - Peer Masterclass Series, an online organization founded during the COVID-19 global pandemic, focused on creating, building, and strengthening musicianship through globally interconnected friendships.
EXPERIENCE
I am a passionate and devoted teacher who believes in the power of music education, no matter the age, level, or distance. I am always looking to further build my private studio in order to spread my love of music and teaching to a number of eager, ambitious, and hardworking students. Over the course of the COVID-19 global pandemic, I have found myself getting more involved with teaching and helping others via the opportunities that have presented themselves over the internet/zoom/virtual/in-person teaching. In May, 2020, I founded a new, primarily peer-based masterclass series called Project Build - Peer Masterclass Series, which has given me tremendous experience teaching at a very high level of artistry and technical prowess. On the other end of the spectrum, I have also gained large amounts of additional teaching experience by teaching through an online organization called Through the Staff, geared towards making music education more accessible by providing free private lessons to preparatory music students hailing from low-income situations. Most recently, I joined the teaching faculty at the Cincinnati School of Music as well as Cincinnati Strings, where I can be found teaching local children.
METHODS USED
For violin and viola lessons, I start my beginning students off with the violin/viola instrument hold as well as the bow hold. Once one has gotten the feel for holding the instrument as well as the bow, I teach the student the open strings of the instrument, followed by a one octave scale, with basic note reading exercises. After that, I begin the student on the Suzuki method. For piano students, I start by teaching beginning students three notes in treble clef (right hand) and bass clef (left hand). After this, I start presenting basic note reading and right hand/left hand exercises of the three/six notes previously studied. I then begin the student on the Leila Fletcher method.
LESSON STYLE
I am a passionate and devoted teacher who believes in the power of music education, no matter the age, level, or distance! I believe in creating and giving extra time for students who are eager and ambitious learners, as I want my students to succeed as well as get as much out of their lessons as possible. I am a supportive teacher who cares about her students, and I enjoy coming up with new ideas and ways in order to get my students to improve on the material to which they are learning. My studio is a positive environment for any individual seeking an education in music.
PHOTOS & VIDEOS
prev 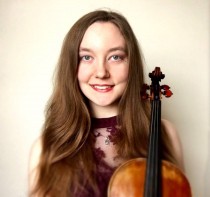 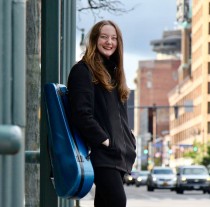 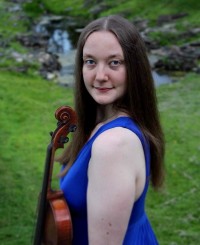