Overview:
I believe that every performer not only has the responsibility to execute challenging repertoire for the benefit of the listeners but in the same way we as students were inspired and instructed then it is only right to give back and pour into others lives the way we have been instructed too and poured into. I graduated from Nyack College School of Music with my Bachelors in Flute Performance and a minor in Vocal Performance. During my undergraduate years I was fortune to go on Domestic tours every semester where I performed with the Wind Ensemble, Choir, and Handbell Choir. In 2013 I toured internationally to Asia where chamber music was performed and taught to the students of selected academies and music programs. in 2016 I was asked to return to Asia and be the Artistic Director for the tour where I would oversee rehearsals, design the program, communicate with prospective donors for the tour, and perform as a soloist. I graduated from New England Conservatory in May of 2018 where I won chamber competitions and was selected to perform with the Wind Ensemble through Canada in 2017. I am now finished with my Masters degree and would like to continue my passion of teaching, and inspire others! :)
EXPERIENCE
Luis D. is a riveting, up and coming flutist from New York City. He is a consummate stylist, enjoying a wide range of styles from the Baroque to new music. Even at a young age Luis showed promise. He was a student with the Young Artist Program at the Kaufman Center while he attended High School at the Frank Sinatra School of the Arts. World famous Tony Bennett, the President of the Sinatra School, ound Luis in the hall one day and called him a “cool cat”, and then helped him get the opportunity to perform in Carnegie Hall with Alexander Markov, one of the top violin virtuoso's in the realm of classical music. Diaz has performed at such venues as Carnegie Hall, Avery Fisher Hall, Alice Tully Hall, Merkin Concert Hall, Le Poisson Rouge, Symphony Space, The Jay Sharp Theatre at the Julliard School of Music, and Kodak Hall at the Eastman School of Music. Luis has performed with the Inter-School Orchestra for numerous years, and has performed with the BAM Philharmonic, the Astoria Symphony Orchestra, “Pershing's Own” US Military Band, Little Orchestra Society and the Manhattan School of Music Symphonic Orchestra. He completed his Masters degree in flute performance at the New England Conservatory of Music in 2018. Dr. Susan Rotholz, the principal flutist for the NY Pops is his current instructor along with Dr. Marie Kenote. He received his B.M. in Flute Performance from Nyack College School of Music in 2015, where he studied under the direction of Dr. Marie Herseth Kenote. Dr. Kenote is an NEC alumni and a member of the New York Philharmonic, where she was a substitute flutist for 20 years under the baton of Leonard Bernstein. In March 2014, Luis was one of only three students chosen to perform in a flute master class with virtuoso flute player, Sir James Galway. In 2013, Luis performed alongside his colleagues in Hong Kong, Beijing, and South Korea. In addition, Luis was the first-place winner in the 2013 New Jersey Flute Choir Competition. In 2012 he performed a Duo Flute Concerto with Andrea Rivera as winners of the Nyack College Concerto Competition. In 2016 he was invited to return to Asia for the 2016 Chamberfest Tour as the Artistic Director where he would oversee rehearsals, prepare programs, and perform chamber and solo repertoire in Hong Kong, Seoul, Macau, and Japan. He became interested in classical music when his elementary school class took monthly trips to the New York Philharmonic, and this is where he discovered his love for the flute as an instrument. “The flute always stood out to me because it was the highest and brightest voice,” he remembers. In elementary school, he began his flute studies through a scholarship program sponsored by the New York Philharmonic at the Lucy Moses School. Through the guidance of Dr. Valerie Holmes, his first flute teacher for 8 years, Luisbegan taking lessons in the fourth grade and then entered the Special Music School in the sixth grade.
METHODS USED
For Beginner students I have them start with the recorder. The instrument allows for a smooth segue to the flute being that the student can see their fingers and the recorder does not require the same air speed and lung capacity that the flute does so the student can pace themselves. For intermediate or advanced students I will go through orchestral excerpts, etudes, or technical studies with them. I follow the same model with my adult students, if they are just starting out I will recommend beginning on recorder to solidify fingerings however the mental and physical capacity of an adult versus a young child are very different. In which case we would start on the flute and utilize book such as 'Melodious Etude Book', 'Berbiguer Etude Book', 'Paula Robison Flute Warmups Book', 'Taffanel & Gaubert' etcetc
LESSON STYLE
I make it a point to ask all students (or parents for my younger ones) to purchase a notepad where assignments, expectations, exercises, tips/tricks can be written down to help them progress during the year and into the following week of lessons. My favorite aspect about teaching is pushing students beyond the limit they place for themselves. That being said there must be a mutual understanding that I will do all I can to help students get over a "learning hump" as I call it- I have access to a plethora of journals, articles, teaching websites, a personal library, all of these materials can be scanned, printed out, emailed and whatnot for the benefit of my students. This being said there must be an effort made on both fronts to ensure that the student is learning at a consistent and effective pace paired with setting goals/checkpoints then the student , regardless of age or skill level, will reach milestones.
PHOTOS & VIDEOS
prev 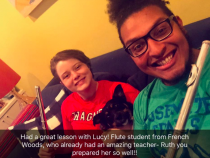 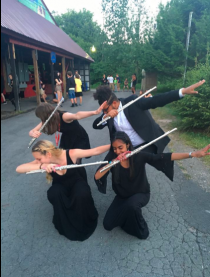 next
Leave a Review
6 REVIEWS

Luis is one of the most kind, disciplined, hardworking, and enthusiastic teachers I have ever met. He is just the right amount of strict while also balancing a healthy and positive student-teacher relationship. He is a leader in every way and was a stellar mentor to me when I was 13 years old. He is punctual, polite, and skilled at the business/management side of his work, but also has a friendly, open-minded, radiant personality and can connect with any student from any background. You will not be disappointed with your decision to learn from Luis.

I have had pretty extensive experience with Luis as a teacher, and his ability’s to add flair and personality to every performance is definitely an asset. Having met him at French Woods Festival of the Performing Arts and both of us being Alumni of the Frank Sinatra School of the arts I can say having performed, and worked with Luis he is a great leader and team player who is adaptable and able to work in any environment.

I had the absolute pleasure of working one-on-one with Luis for the past year. He was professional, resourceful, and had an aura of positivity. Every assignment was filled with laughs and I enjoyed each one. Not only was he fun to work with, but my playing improved immensely. In addition to the online lessons, I attended French Woods Festival of the Performing Art for three summers, where Luis was my section leader. Luis is a leader. He instilled discipline and excellence in each of his students with a flawless balance of encouragement and improvement. He has made me a better flutist and I highly recommend him.

I had the pleasure of working with Luis at French Woods Festival for 3 summers. In those three years Luis taught me a plethora of skills and tools I wasn't getting at home. Luis is not only a fantastic performer, but a fantastic teacher as well. Luis's positive, energetic attitude towards music is infectious. As his student, you strive to impress and make him proud. Luis is a kind, motivating teacher. I hope you all get the absolute pleasure to work with him.

Luis is a great teacher. I met him at French Woods Festival of the Performing Arts and he helped me work through the challenging repertoire there. His instructions are clear and easy to follow. He makes his lessons personal and encourages you when you're struggling, and he caters to each individual learning style. I have learned many new things from him.

Took private lessons with Luis and saw both immediate and long term improvements in my technique, sound, and outlook on the music world. He's a really amazing, fun teacher, and I wish every teacher was a little more like him.