Performed on large National Stages with Rush, ELO,Journey, CheapTrick and many others.

Overview:
About Joe Macre: Joe is known as the bassist for the progressive rock band “Crack The Sky” best known for achieving debut album of the year in Rolling Stone Magazine. Joe was a member of Crack The Sky from 1975–1980. Joe has also worked with The B. E. Taylor Group, Wild Cherry, King Friday, and the KINGS’s. Joe is not just a world-class bassist, producer, engineer, and founder of Cuppa Joe Music, which produces various artists, and compose’s custom scores and sound design for film and TV. After relocating to New York, Joe became an engineer and studio musician and performed with artists such as Jim Croce, David Sanborn, The Brecker Brothers, Marie Osmond, Keith Green, Clint Brown, and others. As Joe’s career expanded into television, he began scoring and engineering for national clients Pepsi, Burger King, McDonald’s, Ford, Nickelodeon, Showtime, Bud Light, Corona Extra, ADR Director/Engineer for Walker Texas Ranger. Sr. Engineer/Sound Designer at Post Op-Editorial in Dallas Texas, Joe is one of the country’s most sought-after mixing engineers. Award-winning credits in films include Monster in Law, House of D and Fire Down Below. His “Cuppa Joe Music” Library and Sound Design are chosen for many national spots, including the award-winning Super Bowl Tabasco’s “Mosquito”, Corona’s “Ship in a Bottle”, Nickelodeon, Showtime, Ford, McDonald’s, Corona, Hyundai, and Oprah Winfrey. Joe has served as an Instructor of Post Production Audio and Music Producing/Composing at Mediatech Institute in Dallas Texas. He also served in the capacity of Director of Career Services, placing students in full-time audio positions. He exceeded government and state placement quotas of 70% in each graduating class. He was recently inducted into the board of directors for SPARS (Society of Professional Audio Recording Services) with Leslie Ann Jones, Audio Director at Skywalker Sound, Kevin Mills at Larrabee West Studios, Tim Butler at Chicago Recording (CRC), Jeff Greenberg at The Village Recorder and Steve Davis at Crawford Communications Atlanta. Joe is an active member of AES and the American Federation of Musicians. 2016 Joe starts work on his latest project Joe Mac’s American Garage with a debut album to be released in 2019 with a cast of up and coming musicians and superstars including Grammy Award Artist Madukwu Chinwah, Steve Major (King Friday), Victor Tasson (Unified Past), David Kowalski, John Palumbo (Crack The Sky), Phil Naro (DDrive), Vinni de Paul (Crack The Sky), Robert Schindler (Johnny Nash), Pete Hewllett (Billy Joel), Andy Timmons (Danger Danger), Trai’D & Tom Braxton. According to Joe. American Garage represents the ideology that bands and music are born in a garage.
EXPERIENCE
I have been teaching Bass/Guitar/Drums/Keys in private lessons for many years. Currently I am teaching at the School of Rock in Wexford, Pa. I spent 2 years teaching at the Baltimore School of Rock as well. I have been successful in my music career and Want to give back to those who are hungry to learn to be a musician, as well as playing the instrument. I teach at each persons current level. Initially I like to get them playing actual songs instead of beginning with a music math class. I am committed to my students and teach each at their current skill level.
METHODS USED

For my beginning students, I teach the INstrument first. What each knob does, the names of the strings and the names of every note on the Bass/Guitar/Keyboard.The Major and Minor scales come next but examples of each are played for the student so that the color of the scales become familiar. I teach how to communicate with other musicians. Charts, Tabs and Nashville number systems are included. A full knowledge of the instrument and how it is used and played is my goal for each student. Keeping their individual gifts and approaches to the instrument must be recognized and enhanced.

LESSON STYLE
Nothing is more rewarding than seeing one of my students develop a passion for music! Therefore, it's important that each student progresses at his or her own pace. I encourage this by setting realistic goals for my students at each lesson. Acknowledging accomplishments helps fuel a students desire to progress, and makes students eager to learn more. By trying to find out what inspires the student, I can successfully tailor my instruction to their wants and needs. By having them begin by playing songs, they develop a desire to go further.
PHOTOS & VIDEOS
prev 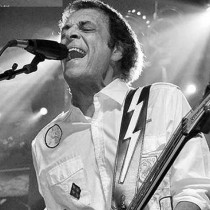 Edward Aufman Wexford Pa. My son and I both take lessons from Joe and have made an AMAZING amount of progress. He got both of us playing the songs we like right away, and gradually got into the theory of what we had learned. Every lesson I am just as excited as the first lesson. He has done so much for both of us, and he is a wonderful person and role model for my son. Joe is a true musician, and has helped us with guitar, bass, and drums. If you are interested in learning and having fun while doing so, I highly recommend Joe