Overview:
I discovered at the age of 16, discovered my passion for the saxophone, and I started my training at a small music school in Bologna. Subsequently, I studied with Piero Odorici and attended jazz seminars at "Siena Jazz" and "Jazz Urbino". The seminars are a great opportunity to play in a big band scenario, with musicians such as Paolo Fresu, Enrico Rava, Marco Tamburini, Roberto Rossi, Eddie Henderson, and George Garzone. I then continue my studies at the Verona Conservatory with Barry Harris, at the American School of Modern Music in Paris with Johnny Griffin and Charles Lloyd, at the "GB Martini" Music Conservatory in Bologna with Barend Middelhoff and Tomaso Lama, as well as with Tom Kirkpatrick and Bob Franceschini.  Later I moved to The Hague, in the Netherlands, where I attended the Royal Conservatory (Koninklijk Conservatorium Den Haag) learning from musicians like Toon Roos, Eric Gieben, Erik Ineke, Rolf Delfos, Gwilym Simcock, Dave Glasser, Dave Libman, and Joshua Redman. Professionally, I collaborated with actor Edoardo Siravo in some theater projects for prose, and with Lucio Caliendo in the soundtrack of the film "Dreaming by Number", produced for the Dutch television and nominated for the International Documentary Filmfestival in Amsterdam (IDFA) ). In the last 10 years, he has collaborated as lead and sideman with several Italian musicians like Andrea Burani, Alessandro Altarocca, Lucio Caliendo, Flavio Davanzo, Enrico Lazzarini, Francesca Tandoi, Glauco Zuppiroli, Bruno Cesselli, Jacopo Zanette, Katja Hyunjung, Nico Menci, and Giani Lincan. As for the discography, I recorded the album "Colors Ties", produced by the label To Be Jazz and distributed by SELF (IRMA) Music. Since 2015, I have played in numerous jazz festivals in the Netherlands, Italy, and Belgium: "Jazz It", "Jazz di Marca", "Biennale" in Venice and "Leiden Jazz Festival"
EXPERIENCE
I started teaching music, right from the start while I was studying at the conservatory. I Started with private lessons to students who were the novice. Later I realized that teaching was also helpful to me, as it helped me in my daily practice. I like teaching kids, especially when they discover jazz improvisation. It is good to see, in the students, the enthusiasm and the willingness to hang and the desire to learn everything immediately. I have had the opportunity to experience teaching both in Italy and in the Netherlands, with different types of students, who approached jazz with different back cultural backgrounds, the result was always the same, Positive. The music helps to develop the brain capacity and brings people together.
METHODS USED
I start with assessing the students' capabilities, after which I begin to develop the following areas: Development of their sound; Instrument Technique; Jazz Improvisation and Jazz Language; Theory and Jazz Harmony; Study and Development of Students' Own Repertoire. Depending on the level of the students and their needs, I push certain areas more or less. The key to becoming a successful student is to practice, to develop a good technique, but also to listen to a lot of music to develop the talent for music. Therefore I encourage my students to listen to a lot of records to understand the right sound.
LESSON STYLE
I encourage the students to listen to music, and above all, I encourage them to enjoy it, while teaching the discipline. The study will not be a burden if the student has fun while playing. One of my goals is that, at the end of the lesson, the students go home with the desire to play again and again. I also think that learning, and preparing oneself to play is a daily activity. This is why I advise my students to practice at least an hour a day, every day. The higher the student's level is higher, the more hours are needed. Everything is proportionate to the student's abilities.
PHOTOS & VIDEOS
prev 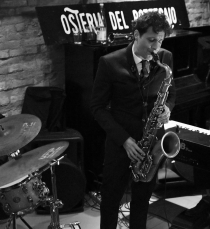