Chicago expat; United States Navy Band drummer; I have developed a reputation for my professionalism and versatility as a musician. Moving to Chicago was the catalyst for my musical career. The diverse and robust Chicago music scene helped mold me into a first-call sideman over the course of a 9-year stint. I enjoyed playing the role of chameleon in many genres: jazz, funk, contemporary pop, New Orleans brass band, zydeco, singer-songwriter, and musical theater among others. While in Chicago, I was featured on 10 album releases and shared the stage with many notable performers: Phil Woods, Renaldo Domino, Mark Colby, Tom Garling, Scott Hesse, Danny Barber, Bob Ojeda, Chris Madsen, Ron Perrillo, Victor Garcia, Patrick Mulcahy, Rob Clearfield, Dennis Carroll, Matt Ulery, Marquis Hill, and opened for Jennifer Hudson. As a sideman, I performed with many acts including the Chicago Jazz Orchestra, Glenn Miller Orchestra, Lowdown Brass Band, Frank Catalano, and Mucca Pazza to name a few. An award-winning musician, I was a recipient of the 2016 Luminarts Fellowship for his outstanding performance in jazz improvisation. I relocated to Washington DC after winning the drumset chair for the United States Navy Band Sea Chanters in 2017. With the Sea Chanters, I've performed for the Chief of Naval Operations, Chairman of the Joint Chiefs of Staff, President of the United States at the White House, NY Giants halftime shows, and the Fireworks Spectacular with the Boston Pops. Most recently, I've released albums with original projects Faraway Plants, Faraway Plants (2019), and Arcana, the sexxxy xxxmas EP (2018), both recorded at my home studio, Groh Studios. Active on the scene in DC and Baltimore, I have freelanced with Bohemian Caverns Jazz Orchestra, MW9 featuring Jon Irabagon, and perform regularly with his chordless trio Third Rail (Billy Wolfe, Frank Silvestrini) and I'm the bandleader of District Brass.

I'm equally passionate about teaching drums as I am when I play them. I've been a devoted teacher and mentor to my students of all ages and talent levels since 2005. Throughout my years of instruction, I have centered my teaching approach on the essential fundamentals of music/drums such as time, rhythm, movement, and style. I also emphasize hand development through the technique of the full-stroke, establishing a strong foundation in rudimental snare playing and limb coordination, as well as musical growth by means of improvisation. Focusing on these key elements coupled with the personal goals of the student, each player will experience a unique, fulfilling musical development. My teaching philosophy is centered on being patient, allowing students to discover their talent at their own pace. Weekly lessons paired with high yet realistic expectations have yielded great results for my students. When a student becomes aware of the control that they have over how they play, real success can be achieved. The goal is to get students energized about striving for excellence in everything they do, and music is a terrific vehicle to witness those results. I developed my passion for teaching during my time in Chicago. I directed percussion programs at Niles West High School, Fenwick High School, Rauner College Prep, and substitute taught at Chicago School for the Arts. I also instructed private drumset lessons at Altered Stage, Guitar Chicago, North Shore Music Institute, and maintained a private studio. Having relocated to the DMV, I direct the marching percussion program at Annapolis High School, substitute teaches at 7DrumCity in DC, and founded my home studio, Groh Studios, in 2018. My students have gone on to study music at Monmouth College, Eastern Illinois University, Lawrence University, McNally Smith College of Music, IUPUI, and the University of Illinois Urbana-Champaign. I received my BA degree in Production Studies in the Performing Arts from Clemson University and earned my MM degree in Jazz Studies from DePaul University. I'm a proud member of the Vic Firth Education roster and endorse Vic Firth sticks/brushes/mallets and Remo drumheads.

I try to marry the goals of each of my students with the necessary skills of a complete, professional musician - time, style, feel, sensitivity, adaptability, and control. I tend to start with any grip/technique issues and then expand on the student's vocabulary, building on what already feels comfortable to them. Each lesson is completely customized to the individual; there is no "one-size-fits-all" delivery for each lesson plan - and that's what makes teaching such a fun challenge for me. I always recap each lesson during the last 5 minutes of the lesson, listing all the objectives for that week and the expectations for the next time I see the student. My goal as a teacher is to make sure that you not only know what's being asked of you, but HOW to practice those elements between lessons.

Weekly lessons with me are structured around achieving attainable short-term goals. Daily practice sessions are encouraged, but thoughtful, intermittent practice sessions far outweigh the necessity of sitting behind the kit every day. I strive to make the atmosphere of the lesson relaxed and fun; I'm patient and accommodating for different styles of learners. Although I'm fond of several famous publications such as Stick Control and The Art of Bop, I don't rely on text as the only way to deliver a musical message. I often reference recordings and offer listening assignments to students as a way to connect to the material. I also implement ear training, transcription, sightreading, and rudimental exercises to assist in each student’s development. I teach a wide variety of drumset styles and concepts: Pop, Rock, Funk, R&B, Hip Hop, Jazz (big band and small group), Latin/World, New Orleans 2nd line, Jazz Ensemble chart-reading, and Improvisation. 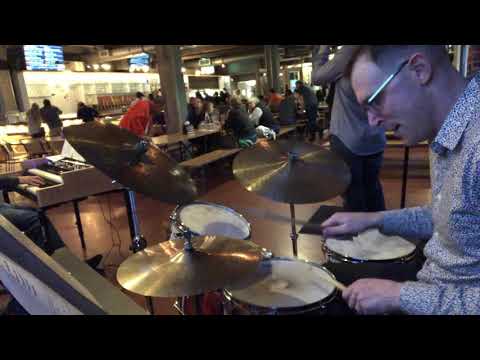