ABOUT
Degrees / Training / Special Info:
BM, Puerto Rico Conservatory of Music
Awards:
2006-Willie del Moral Achivement Award 2009- Indo Echevarria Scholarship 2016- 1ST Prize Professional Chamber Music Competion, Toronto Latin American Flute Festival
Overview:
As an award-winning flutist, I am a solo, orchestral and chamber musician. I perform with the Puerto Rico Symphony Orchestra, Casals Festival Of Puerto Rico, the Philharmonia Symphony Orchestra, and Camerata Filarmónica, among others. My experience includes performances with conductors such as Pablo Heras-Casado, Maximiano Valdés, Carlos Miguel Prieto, Victor Yampolsky, and Kenneth Kiesler. In 2014, Cosme was appointed artistic director of the summer orchestra " New Symphonic Project". My passion for chamber music, orchestral ensemble, and the awareness to promote concert lead me to the Zafra Wind Quintett (2011), Cosme-Zook Duo (2015) and the Puerto Rico Summer Music Festival (2015). During the 2015-16 season, I completed a tour with pianist Amanda Zook (Cosme-Zook Duo), performing in New York City, New Jersey, Puerto Rico and Canada. These concerts were sponsored by Project 142 and themselves. As an educator, I teach at the Escuela de Música de Manatí. There I teach flute, flute choir, and wind ensemble. Also, I hold the teacher's assistant position given by my mentor Josué Casillas. I have attended festivals such as' Sewanee Summer Music Festival, Imani Winds Chamber Music Festival, and the Nuevo Mundo Festival & Academy. I have taken masterclasses and private lesson with Ulla Suokko, Katherine Kemler, Nestor Torres, Sarah Frisof, Marina Piccinini, Nicole Esposito, Ransom Wilson, Alberto Almarza, Marco Granados, Patricia George, Alhelí Pimienta, Gary Schocker, Bart Feller, María Gabriela Rodríguez, Paula Robison among others.
EXPERIENCE
My passion for teaching goes way back to my middle School years when my band professor would let me teach the younger grades. Throughout the years my love for teaching has increased, watching my students grow in every lesson, watching them achieve their goals is what inspire me to keep the hard work. It very important for me to encourage daily practice and it's very important that parents do too.
METHODS USED
For Beginning students, I use Hal Leonard's Essential Elements and for the little more advanced Rubank's Elementary Method, Moyse For the beginning Debutant. For intermediate and advanced students will cover Moyse: De la Sonorite, Taffanel & Gaubert Daily Exercise Book, Trevor Wye's Practice Books for the Flute, Patricia George The Flute Scale Book, Reichert7 Exercises journaliers pour la flûte, Op.5. Among the other method book, we will work on your concert and competition pieces. For adults, we will assess your skill and work from there.
LESSON STYLE
Seeing my students grow and develop in every lesson is rewarding. Encouraging them to keep going it's my best attribute. It's very important to me that each and every student develops at their own pace. Setting short and long-term goals as for each lesson is very important for the student; this way he/her can know what to expect from the teacher.
PHOTOS & VIDEOS 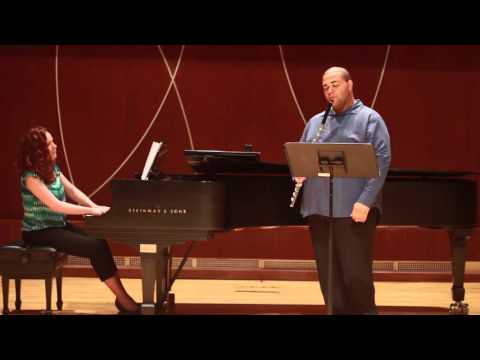 During his BM, Darwin became my un oficial teaching assistant. His brilliant ideas and wonderful insights can turn anybody into a great flutist. Darwin C. knows exactly what to say and how to say it to gear any aspiring flutist towards excellence. -Josue Casillas, Principal flutists PuertoRico Symphony Orchesta Catedrático Asociado, Puerto Rico Conservatory of Music