2013 - graduated from KU School of Music with *full scholarship*

As a multi-instrumentalist, I've loved teaching piano, accordion, and brass instruments to all ages and levels the past +20 years. I've lived, taught, and performed around the world: after earning my bachelor of music in piano performance degree alongside my bachelor of music in horn performance degree in Kansas, I went to the New England Conservatory in Boston for my master's in horn. I was lucky to have received full scholarships for all my degrees. Most recently, I was principal horn for the State Opera in Stara Zagora Bulgaria for two years before covid stopped (mostly) everything, and as we all are, I'm slowly getting back into the swing of freelancing and performing in an entirely new city: Los Angeles, California.

As I mentioned in the "about me" section, I served as principal horn with Държавна опера Стара Загора (the Bulgarian State Opera in Stara Zagora) from late 2017 to the very end of 2019, right before the pandemic hit. Before that, from 2016-2017, I taught public school for the first (and last) time in Natoma, Kansas, acting as the band, choir, and advanced music instructor. That same year I also taught at Fort Hays State University in Hays, Kansas as Interim Professor of Horn and also was a staff collaborative pianist. I studied with Frøydis Ree Wekre, renowned hornist and pedagogue, by invitation at the Norges musikkhøgskole in Oslo in the summer of 2015, and in the fall of 2015, I went to Toulouse, France to study with Jacques Deleplancque, solo horn at the Orchestre National du Capitole de Toulouse. In college from 2009-2013, I played piano for the juries and recitals of students in the vocal, flute, trombone, tuba, and horn studios. In 2010, I performed in the Eutiner Festspiele in Schleswig-Holstein, Germany as principal horn, performing operas and symphonic works. In 2012 in Prague, Czechia, my chamber group won second prize at the Ameropa International Concertante Competition with Mozart's Sinfonia Concertante for Four Winds in E-flat major, K. 297b. That same summer, I was accepted into the Colorado College Music Festival with full scholarship. Throughout the pandemic from 2020-mid 2021, I taught English and pronunciation online to students all across the globe. And as always, I continue to write my own pop/indie/moody music and currently am getting into the performance and production scene in Los Angeles.

Essentials are first. Note names, hand position, mouth position, air, posture, rhythms, sheet music, ear training - it's all important and needs to happen concurrently. Everyone has different strengths; some students are able to handle a large amount of information stacking while others need a more one-at-a-time approach. Music is all about doing several physical and mental things at once, developing self awareness in learning *how* to improve a skill, and myelinating the pathways in your brain for the fastest connections possible.

I find that metaphors using familiar things and processes, like the laws of nature and physics we see everyday, can help students grasp concepts that require marrying physical movements with mental flexibility. Perhaps we're discussing articulations and you're having trouble understanding stylistically how to approach and execute staccato with legato over it. We could turn to methods like the Breathing Gym to practice a physical manifestation of how that articulation should sound. We could liken the sound to a drop of water in a pool. I could gently push on your shoulder for the duration of the note and the force of the attack we're going for. There are lots of ways of describing something as abstract as music - we just have to find the way that makes sense for you. 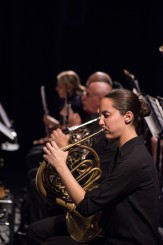 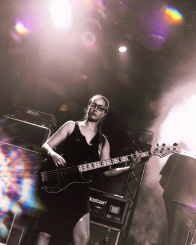 Breanna was very friendly and kind to my daughter. She is very knowledgeable and finds ways to make piano lessons fun while encouraging her students to maintain high musical standards. She can provide appropriate musical instruction to all ages and ability levels according to whatever your personal goals may be and she will deliver with a smile!

Breanna is a talented musician who will go above and beyond to meet each of her private students where they are, and help them grow both musically and technically. Personally I received private lesson from Breanna during my undergrad. During my time studying under her I grew significantly on horn, and gained much more confidence and control in my playing. This growth was in large part due to her creating the least restrictive environment for me. I highly recommend her to anyone looking for a positive challenge that will produce fantastic results with the proper practice.