I studied Piano at the Conservatory of Music In Rotterdam, The Netherlands

I studied Composition with Elinor Armer in Berkeley, CA

I played the piano as a child and quit when I graduated from high school because I was bored with the music and the strict, conventional method of teaching. Thirty years later, I found Tom and have renewed my love for the piano and especially classical music. His style of teaching is relaxed and inspires you to practice and want to learn. I recommend Tom Penders for anyone, any age, at any level, who would like to begin taking lessons or, like me, would like to return to taking lessons, but is afraid of becoming bored and quickly losing interest. Call Tom. Once you've had a lesson or two with him, you will become hooked.- Carole Huygen, Petaluma.

I first met Mr. Thomas Penders three years ago when he hired me to tune and regulate his piano. After hearing him play the piano, I was so astonished by his ability that I asked him to perform for an audience of professional pianists and musicians in my home, which he graciously agreed to do; I had never done such a thing before. After that, I arranged several public performances for him because I strongly believed his extraordinary playing should be heard by as many music lovers as possible. Together, we also made recordings of his piano performances on my Yamaha concert grand. I also became familiar with Mr. Penders musical compositions, and am equally impressed by his abilities in this field. Further, I took piano lessons from him and have recommended him as a teacher to several friends and customers of mine. I have found his abilities as a teacher at the same high standard of his other accomplishments.- Larry Lobel, RPT member of Piano Technicians Guild, Petaluma.

I returned to the piano at the age of 56 after an absence of more than 30 years. I first began on my own, but soon found that I had great difficulty progressing. After 2 years, I decided I needed a teacher who was comfortable working with someone my age. I chose Thomas because he was the only teacher in the North Bay who showed his own performances on his website. After my first lesson, I knew I had found the right teacher for me. He has been patient while at the same time encouraging and prodding me to go far beyond what I thought possible at my age. I am now playing at a level that I thought would forever remain a dream, and I continue to make much greater progress than I had imagined posssible. He has transformed my playing, not just technically but aesthetically, and I am now playing not just notes, but music. Words can't express the joy this has brought me."- Charles Harris, San Rafael.

I have studied music for over 25 years and have been active in many symphonic associations. I believe Thomas Penders is a very talented composer and will develop into a great composer. I have listened to some of Thomass compositions. To me they are wonderful and exhibit a style that is both modern and historically classical. Thomas has written for Piano, orchestra, cello and vocal. -Phil Paisley

Music is essential for the development of our brain. Our brain works in different ways so I believe that we all play piano in different ways. I spend my life searching for the tone of particular composer and also composing music, I have written piano sonatas, chamber music, symphonies I received training form Aquiles Delle Vigne, a student of Claudio Arrau ( Franz Liszt Lineage ) I had master classes with Vladimir Tropp. A professor at the Conservatory of Moscow In 1993 I worked with Professor Niv who was a student of Arturo Benedetti Michelangeli I studied Music Composition and Tune pianos professionally

I have 30 years of experience in Piano Playing, Piano Teaching, Music Composing and Piano Tuning My experience goes back to the Netherlands where I started to teach while going to the conservatory of music in Rotterdam. It is the philosophy of the Franz Liszt Lineage to always include teaching in your career as pianist and musician. I did not only do that,.....I also wanted to get professional coaching in music writing. So I decided to take my music composing to a professional level by taking Composition classes with professor Elinor Armer in Berkeley, CA during 2006 to 2009 I also became a professional Piano Tuner in the North Bay

My Methods are based on the need of the student. Practicing scales and learning to play broken chords / harmonies are part of the lessons for beginners Practice For Results Practice daily (even if it’s just 15 minutes) Regular piano lessons should be both fun and provide real value What Will You Learn? Having fun while playing Using the correct technique Sight reading music Should Adults Take Lessons? Playing piano as an adult is a good way to relieve stress I encourage adults to start playing piano

My Teaching style: Free style based on the technique needed to play a particular piece of music Some improvisation I like to work on books and improvisation for beginning students. With the intermediate student I like to work on music I suggest or music that the student like to work on. Not all students aim for concert stage so it is important to also just have fun with the lessons and see your progress as the lessons go by. Music is NOT a competition in my view........if you are looking for that,... then i might be the wrong teacher for you. Music in my view is about Art, Science and Feelings. Each musician is unique in his or her own way. 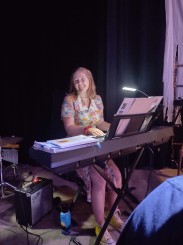